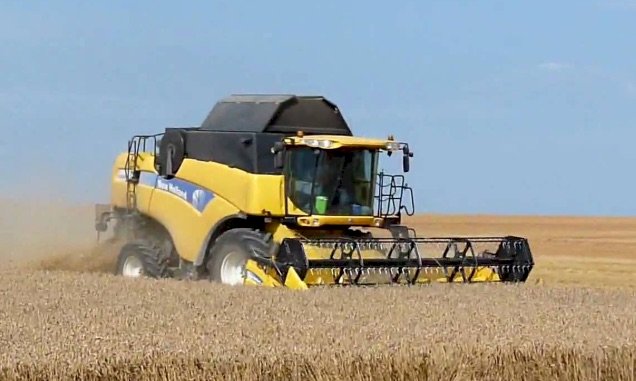 The winter crop harvest is winding down across much of Europe despite the challenges presented by weather extremes that have hampered field activities in a number of countries and played havoc with crop quality.

Harvest rains and quality issues have been observed across most of France, the western parts of Germany and large parts of Poland. The wet weather did extend further west into Belarus and south as far as northern Italy, but impact on crop quality was not as drastic. In the north of the continent, a hotter than usual July in Sweden, the Baltic states and Finland affected grain filling of spring and winter cereal crops as soil moisture ran out early.

According to last week's European Commission crop update, soft wheat production is forecast at 127.2 million metric tonne, down from 127.7MMT in July. This was on the back of a slight reduction in yield from an average of 6.05 metric tonne per hectare (MT/ha) to 5.98MT/ha. However, this yield is still 7.9 per cent above the 2020 harvest number of 5.54MT/ha and 5.1 per cent above the five-year average of 5.69MT/ha.

Despite the production downgrade, the Commission maintained its European Union wheat export outlook at 30.0MMT for the 2021/22 marketing year, which commenced on July 1. On the oilseed front, the Commission reduced 2021/22 canola import projections by five per cent from 6.0MMT to 5.7MMT, even though its European Union production forecast remained unchanged at 16.9MMT.

Conversely, the production estimate for winter and spring barley collectively was increased slightly from 52.6MMT to 52.9MMT. The forecast yield jumped from an average of 4.96MT/ha to 4.99MT/ha, 4.4 per cent above the five-year average of 4.78MT/ha but only 2 per cent above last year’s yield of 4.89MT/ha.

French farmers have almost completed this year’s wheat harvest, but it is running two weeks behind the pace of the 2020 edition and 11 days behind the five-year average. Last Friday, farm office FranceAgriMer pegged the soft wheat harvest at 96 per cent complete as of August 23, up from 91 per cent a week earlier after a two-week hot spell allowed fieldwork to pick up following the rain disruptions earlier in the program.

Agriculture consultant Agritel has dropped its French wheat production estimate below 35MMT following a survey conducted among French farmers. Agritel is now calling the crop 34.93MMT, down from 37.9MMT following their July survey. The harvest rains have drastically affected grain quality, with test weight taking a hit. As a result, the average yield expectations have dropped from 7.60MT/ha to 7.07Mt/ha.

Test weight measures grain density and is a critical determinant of quality suitable for the milling industry. Most millers require a minimum of 76 kilograms/hectolitre (kg/hl), while stockfeed consumers tend to request a minimum of 72 kg/hl, or even as low as 70kg/ha. This suggests that French exporters may struggle to meet the quality of their long-term buyers in north Africa, with stockfeed buyers in the Middle East and Asia likely alternatives.

The winter barley harvest in France has long concluded, but the spring version is lagging the long-term average on account of the wet weather. FranceAgriMer called the spring barley harvest is 97 per cent complete last week compared to 100 per cent a year earlier. Reports suggest that the spring barley crop withstood the wet harvest conditions and quality remains satisfactory, and there will be ample supply to meet domestic malt demand.

According to the German agriculture ministry update last week, total wheat production in Germany is forecast to fall 3.36 per cent year-on-year to 21.37MMT following the wet harvest. Weather extremes punctuated the German season with a cold spring leading into a hot, dry start to the summer. And when the harvest started, uninvited summer storms delayed the harvest and reduced crop quality. Nonetheless, the quality issue is not as bad as in France, with German wheat said to be replacing French supplies into overseas markets, including major customer Algeria.

The poor harvest weather has also impacted canola yields, with production now forecast to increase by only 0.2 per cent over 2020 to 3.52MMT, 11.3 per cent below the five-year average. This compares to the agriculture ministry’s upbeat May production forecast of 3.8MMT. On the other hand, barley production is bucking the trend, with output expected to be 2.2 per cent higher than last year at 9.0MMT.

Wheat production in Poland has also taken a hit due to heavy rains over the harvest period. According to local consultant and analyst Sparks Polska, the country’s wheat production forecast is now 11.9MMT, down from their July estimate of 12.1MMT and just below last year’s mark of 12.0MMT.

In Belarus, the government has imposed a six-month grain export ban following a poor, weather interrupted harvest. The ban will be valid for six months and applies to the export of wheat and meslin, rye, barley, oats, corn, buckwheat, millet, triticale, other cereals and canola outside the Republic of Belarus. The country has completed its 2021 harvest, delivering 6.2MMT of grain, a 14 per cent decrease on the 7.2MMT reaped in 2020.

The wheat harvest in Bulgaria was 98.7 per cent complete as of early last week, and the local farmers had bagged 7.1MMT, 51 per cent higher than a year earlier. The average wheat yields have averaged more than 6.0MT/ha, a welcome improvement on the drought-affected 4.0MT/ha produced off a much lower harvested area in 2020. Bulgaria's barley crop has also recovered from last year’s debacle, up 25 per cent to 0.7MMT this year.

It has certainly been an eventful harvest for the European farmer this year. While wheat production may be higher than in 2020, quality issues will present challenges for both domestic consumers and export supplies.

However, this is not unique to Europe. The world has both a wheat production and protein wheat deficit to solve, particularly amongst the major exporting nations. Some serious rationing will be required to balance the books, but the global consumer has only just read the headlines. Higher prices are here to stay for some time yet, it seems, and the burden on Australian wheat production and exports over the next twelve months will be extremely high.