Demand for Mutton continued at high levels at Bendigo 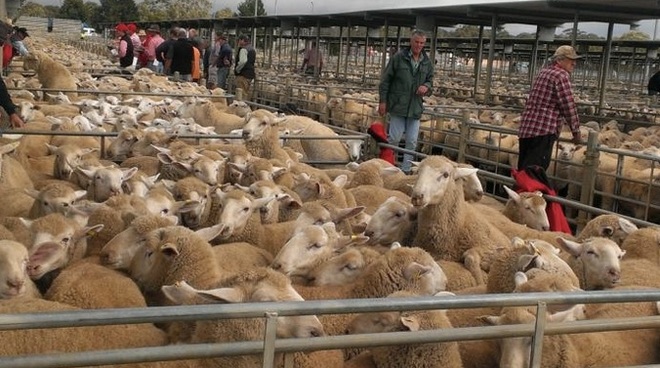 Yarding - 32,000 (+3500).
Lambs - 22,000 (+1000)
Sheep - 10,000 (+2500).
Little change to lamb numbers but there was a lift in sheep supply following last week's very strong mutton market. Only odd pens of shorn lambs are appearing with woolly young lambs still dominating. Quality was again very mixed with southern areas still providing fresh conditioned young lambs but most stock from northern grazing regions now appearing with dry skins and seed. Like last Monday the market did perform around quality and was erratic at times. The best trade and heavy lambs were $2 to $9/head dearer, while the general run of domestic lambs sold at similar levels to a week ago. Some of the smaller store lambs to the paddock were dearer.
The heaviest export young lambs over 30kg sold from $225 to a top of $240/head. The bulk of the heavy lambs were in the 26 to 30kgbracket and sold from $200 to $230 to average $216/head, with this category recording some of the best price gains. Underneath this was the general run of domestic lambs which sold from $160 to $185/head. Most lambs made an estimated 730c to 770c/kg cwt. Small and light lambs sold from $130 to $160/head to a mix of restocker and MK processor competition. There was some very small Merino and crossbred lambs under 12kg that sold strongly on a size basis. There was new store buying activity via a restocking order from Rainbow in the west of the state.
Demand for mutton continued at high levels, with prices for the main lines of Merinos and crossbreds firm to dearer again. Two export buyers drove prices for heavy sheep, and their bidding clashes did create price spikes at times. Some processors didn't operate or only purchased limited numbers due to the strong carcase rates of 620c to 700c/kg cwt across most sheep. Big crossbred ewes made from $185 to $269 to average $235; heavy Merino ewes sold from $208 to $264 to average $238; heavy Merino wethers made from $228 to $242 and plainer sheep sold mostly $120 to $160/head
https://www.bendigo.vic.gov.au/Services/Bendigo-Livestock-Exchange