Dedicating his Farming life to restoring health into his depleted soils 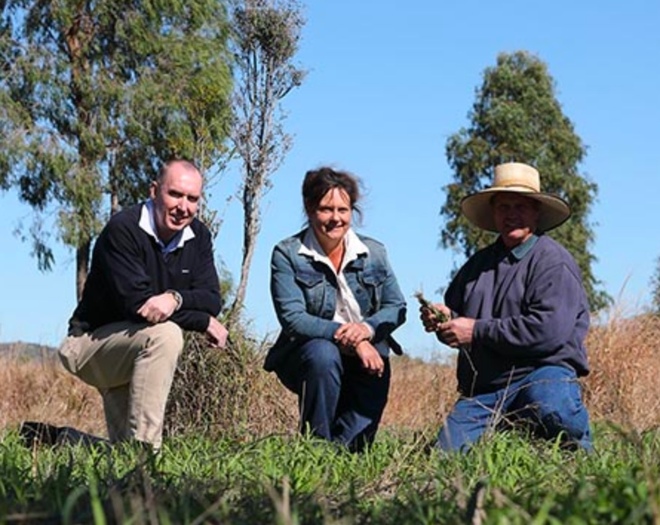 Buoyed by childhood memories of lush grass growing well above the ute bonnet, central Queensland grazier Andrew Lawrie has dedicated his farming life to restoring health into his depleted soils. Yet he admits that 20-years-ago, regenerative agriculture was a hard-sell.

“Initially I was excited to share my knowledge and talk to people about how to turn their country around – but I quickly learnt it was easier not to say anything,” Andrew said.

Today, it’s a different story – with the benefits of holistic grazing widely applauded, farmers Australia-wide are all ears as they too look to emulate Andrew’s successful system.

Together with brother Peter, Andrew took over the family property “Moora Plains” in the Gogango district in 2000 and immediately began investigating solutions for his land’s poor pasture performance.

“The property had always been conservatively stocked, but despite this, stock set in the same paddock every year never afforded an opportunity to rest the country.”

Through word-of-mouth, Andrew discovered Grazing for Profit, an educational resource exploring production, ecosystems and business, and by 2004 had his first intensive cell up and running.

“We split two large paddocks into 28 and were astounded by how the country responded from rest,” he said. “For the majority of the year the paddocks are rested, and we could see the results before our eyes.”

Andrew and Peter separated their businesses in 2007, with Peter continuing his operation in the nearby Westwood district, and Andrew passionately delving further into holistic management techniques.
“Experimenting with, and understanding the various systems and soil responses is fascinating – and splitting up paddocks certainly became quite addictive,” he laughs.

Of his 3,500 hectares Andrew, together with wife Meagan, now run one mob of cattle through 70 odd paddocks.
“Initially we had four mobs which we gradually reduced to one, and currently during winter we rotate the mob every couple of days.”

During the warmer months he admits things can get hectic, with the mob moved up to twice a day during the peak growing season.

The Maia Grazing App has helped Andrew more accurately forecast his feed budgeting and planning, and his stock days per hectare per 100mm of rain (SDH/100mm) was on a continually rising trajectory.

However, his venture has certainly not been without its challenges, “if it was easy, everyone would be doing it,” he chuckled.
Since 2016 pasture die-back has decreased grass production by up to one third, and remains an ongoing frustration, and hindrance to the property’s continued improvement.
And although his management practices helped mitigate some pain caused by the recent widespread drought, Andrew sold-down much of his herd in January 2020.

“It’s an interesting time in the cattle game, particularly trying to navigate back into the market, but we’re gradually working our way back up to capacity.”

“Past experience has shown that in heavy soils, after a drought the carrying capacity should be halved. So much capacity was pulled out of the land during the drought, we are essentially still managing for drought conditions – it would take a good annual season before we would return to our full stocking rates.”

Currently experimenting with over 200 days rest for some of his paddocks, Andrew is pushing well beyond his previous average of 120 days rest during winter – and is not afraid to tweak longstanding structures.

“People can tend to get hung up on the principles of regenerative agriculture. Definitely use them as a guide and don’t lose the capacity to get inventive.”

“Whether you like it or not, in ventures such as this the bank is your business partner, and I for one only want to partner with people I enjoy working with,” Andrew said.

“Michael has shared our vision, and as a bank Rabobank has been exceptionally progressive in the regenerative space.”
He said the bank’s commitment was cemented when the Lawrie’s placed their whole property under a soil carbon project.
“It was extremely reassuring knowing Michael shared our confidence and was willing to support us.”

This assurance also afforded Andrew and Meagan the confidence to be involved in a Land Restoration Fund pilot project, aiming to potentially profit from soil carbon, tree carbon and biodiversity offsets.

“We have a number of friends who bank elsewhere having great difficulty getting projects such as this across the line, so we feel very fortunate to be able to explore these opportunities.”

No longer in the minority, Andrew is now a leader in a farming movement tipped to sustain the industry well into the future.
Acknowledging that regenerative agriculture may be the current buzzword within the industry, this quiet achiever believes a rebrand is in order, with the emphasis on looking forward, rather than back.

“I like to see it referred to as ‘generative agriculture’ – generating a viable industry for the future, and one that we can all be proud of.”