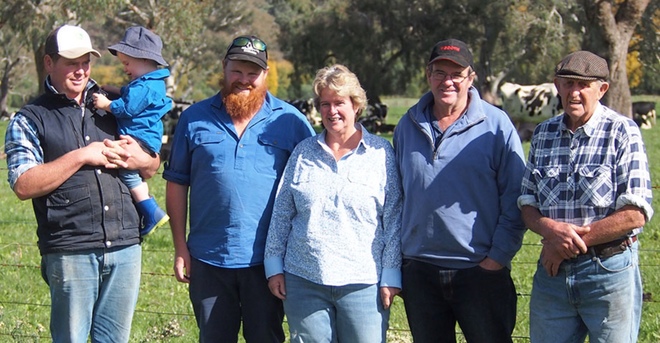 With four generations of the family living on their Upper Murray dairy property, ongoing business improvement and succession planning go hand-in-hand for husband and wife team, Craig and Jo Sheather.

The Sheathers’ home property, Akoonah – 814 hectares in the Biggara Valley in the Upper Murray region of NSW – has been in the family’s hands for 60 years and was originally owned by Craig’s father and uncle.

“They ran dairy for a while then went into beef for a few years, and 24 years ago I had the great idea to go back into dairy again,” Craig said.

“We had leased another place about 20 km away and income was slowing down. Being on river flat, dairy was a very good option for us, so we went down that path.”

Today, their dairy operation has about 220 cows producing approximately 1.7 million litres of milk annually.
It was the move back into dairy that led to the Sheather family’s ongoing relationship with Rabobank.

“When we decided to go into dairy, we weren’t getting any answer from our bank, so we gave Rabobank a call,” Craig said.
“They were very quick, came and had a look, and the best thing was that they actually knew what they were talking about.
“Rabobank were switched on to the agricultural business – they know the ups and downs and timings.”

“It all went from there and we’ve had a great relationship since. We really appreciate what they have done for us. And the All In One account just makes it so much easier to know where you are at any given time.”

Craig and Jo have been sole owners of the business since last year, after Craig and his brother bought there uncle out of the original business in 1985 and then his parents and brother last year.

“There is a bit of a story to it I suppose. I started trying to do succession planning when dad was 59 and last year he was 85 when it happened,” Craig said.
While it had been on their minds for many years, Jo added that they only really started pushing ahead with a succession plan about five years ago.

“We did it with the help of Rabobank’s succession planning people. Our farm was in two titles and we initially got the first title, where our house is, in our name. Then last year, we took over the rest of the farm,” she explained.

“There’s actually four generations of us living on the farm here now – Craig’s parents, us and our son and his partner who have a little five-and-a-half-month-old boy.”

With two sons and a daughter now in adulthood, Craig and Jo are planning ahead for the next round of succession.

“We’ve taken the first step in the way we have set up our business with family trusts to make things a little bit easier. Over the next few years, when the business is a bit more established, we’ll be thinking about it big time,” Craig said.

“I have one son here helping me full time. Our other son is on a bushfire management summer crew, but he spends the other six months of the year working on the farm.

“Ten years from now, I’m pretty sure I’ll have one son running the business. I’m not sure what my role will be, but I’m willing to step back at any given time.”

Despite challenges like milk prices and drought, Craig is optimistic that they can continue to grow their business for the next generation and is always on the lookout for ways to increase their productivity.

“One of the draw backs at the moment is that land prices in this area are ridiculously high. So I think that’s going to make us concentrate on what we can actually do here using what we’ve got,” Craig said.

“We try to improve all the time in what we do. I try not to get stuck in my ways, and I’m pretty open to other people’s ideas and other people’s advice.”

Craig said that technology had helped, especially in keeping track of production and individual cows, and pasture improvement.

“Over the last couple of years we’ve made some changes to our grass, what we sow and when we sow, and I think we are starting to kick a few goals now. We are trying to cut out bringing in fodder and this has certainly helped our bottom line,” he added.

“Farming can be very tough, but also very rewarding too. There are heaps of opportunities around, and we just have to keep our ears to the ground and keep up with everything.”