Chris Clyne - Chickpeas had become a vital rotation at Moree 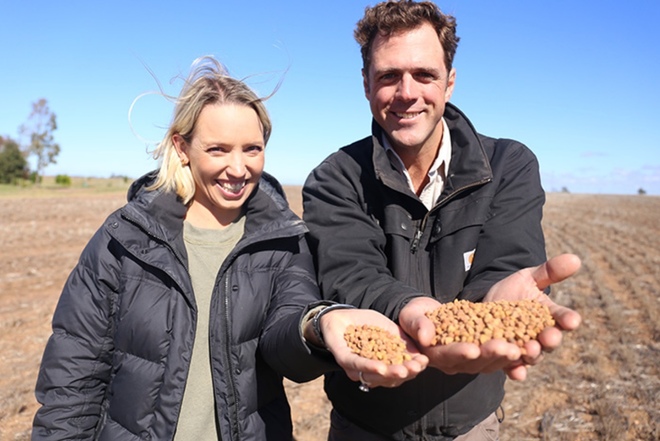 A darling of vegans and hipsters across the globe, the humble chickpea is just as trendy among the Australian farmers who grow this highly nutritious, and tasty superfood.

In the lead up to International Hummus Day on May 13, chickpea grower and Rabobank client, Chris Clyne, said that while the popular Middle Eastern cuisine may seem exotic, its roots are firmly in Australian agriculture.

Chris, of Moree in north-west NSW has been farming chickpeas – the main ingredient in hummus – for the past eight years, and said the benefits of growing this versatile legume go well beyond the creation of his favourite dip.

“Chickpeas are not only nutritious to humans – as a legume they fix nitrogen in the soil, which is vital for healthy, productive soil,” Chris said.

The Clyne family has been farming in the district for over 100 years, growing cereal crops such as wheat, barley and sorghum, as well as dryland cotton.

Chris said chickpeas had become a vital rotation in their farming schedule in recent decades, returning valuable nutrients to the soil and allowing for herbicide rotation on weeds. However they can prove tricky to grow.

“Chickpeas are highly susceptible to fungus and mould, so you have to have a well thought-out fungicide plan, and avoid growing them in wet years when these issues are exacerbated,” he explained.

Traditionally grown in arid areas, chickpeas are grown extensively in the Moree district, planted from May through to June and harvested around October and November.

There are two chickpea varieties grown in Australia, kabuli chickpeas – the larger salad variety traditionally used for hummus - are grown in the south of Australia, while desi chickpeas – a smaller, darker variety – are grown further north, including in the Moree district.

Chris said almost 100 per cent of desi chickpeas, including those grown on his property, were exported to India and Pakistan to make Dahl.

However that hasn’t stopped Chris making his own hummus out of desi chickpeas.

“I like to keep their shell on so the hummus is a bit more gritty, and add a bit of chilli and coriander to give it a bit more of a kick,” he said.

Grown in a pod on a low-growing plant, Chris estimated there were around 100 pods per plant, with about two chickpeas per pod.

Once harvested, Chris sells his chickpeas to exporters, and they’re delivered via truck to ports in Brisbane or Newcastle, where they are fumigated, containerised and stacked onto ships for delivery.

It’s a long journey from the paddocks of north-west NSW, and Chris said he’s proud to be providing such a high-quality, nutritious and globally-applauded product, internationally.

And with unlimited access to chickpeas literally through the fence, it’s hummus for days in Chris, and his fiancé Georgie’s, kitchen.

Picture - Chris, and his fiancé Georgie