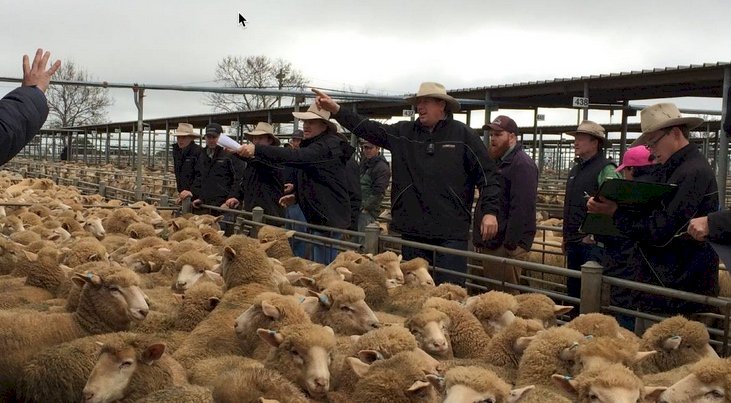 Modest increase in lamb numbers to 15,700 head, dominated by crossbred stock with Merino numbers declining on recent sales. Still, some very good quality in the lead runs of heavy lambs off-grain, while trade and light lambs remained mixed for finish and presentation. Not all the regular export buyers attended, and demand from the buying ranks was selective and more subdued than a week ago. Very little restocking interest was evident. The market fluctuated, opening cheaper before improving and then losing momentum again. Lamb prices were $5 to$15/head cheaper compared to last Monday's stronger sale.

The heaviest export lambs over 30kg cwt sold from $230 to a top of $274/head, and with some big weights on offer the carcase average came back to an estimated 725c/kg cwt. Some of the heaviest lambs trended below 700c/kg cwt. The heavy 26 to 30kg cwt lambs, $204 to$228/head for a spread of 720c to 780c/kg, the lighter weights selling the best in this category. Competition was still robust for the very neat trade lambs at $180 to $210/head, and some pens still pushed over 800c/kg cwt. However, when plainer trade lambs were averaged into the figures, costings came back to an estimated 760c to 770c/kg cwt. There was very little restocking support and processors were able to purchase light lambs at cheaper rates. Demand for Merino lambs also waned.

The mutton run included a mix of heavy Merino wethers and crossbred ewes, down to smaller lots of plain sheep. Not all buyers were active, and prices were cheaper. Pens of big crossbred ewes topped at $225 and tracked in a tight price range of $200 to $215/head, and on weight, were estimated at less than 600c/kg. Merino wethers sold to $235 and heavy ewes to $226/head. The better lines of Merino mutton were estimated at 620c to 670c/kg cwt.