Benchmarking really does filter out a lot of distractions 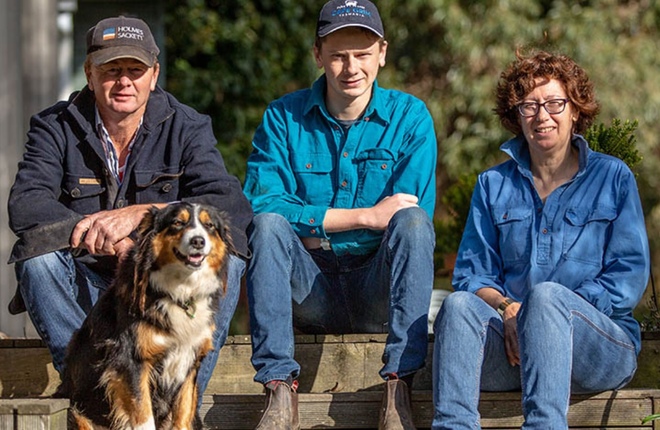 In recent years the picturesque, and highly productive island has become renowned for running Black Angus cattle, but Scott maintains full confidence in his Poll Herefords – and he has the figures to prove it.

“It is quite unusual to be running Herefords here on the island, but I’m fortunate to be part of a benchmarking group, and the data definitively tells me that white face cattle are just as profitable as black cattle.”

Having transitioned from sheep into cattle in recent years – he sold his final load of sheep just this month – Scott said he was attracted to the Poll Herefords’ strong performance history, docility and the opportunity to cross-breed for hybrid vigour.

Obstinacy, he laughed, was also perhaps behind his unwaivering dedication to the breed. And if the numbers stack up, Scott said, “there’s no reason we all have to run one way and produce the same breed.”

The Anderson’s operation is strictly profit driven, with every on-farm decision questioned thoroughly.
“We aim for profitable protein production – with a focus on getting the basics right, and doing them well.”
Conditions on Flinders Island are some of Australia’s most optimal for beef production, its mild climate and 750-millimetre annual rainfall average affording the Anderson’s year-round grass - with very little supplementary winter feeding necessary.
“Our strength is growing grass, and for us, the key is utilising the pasture that we grow,” Scott explained.

Highly disciplined in his approach, Scott said the best way to utilise the pasture was to eat it off, matching feed supply to animal demand curves.

“We don’t chase winter price premiums – we’ll take them if the season allows, but for us, it’s more about working within the growing conditions that we have.”

“We watch our feed budgets, and continually assess for feed surplus and how it can be best utilised – sometimes we’ll run extra stock, if we can.”
The Anderson’s aim to produce 400 kilograms/per hectare at a cost of $1.20/$1.30/per kilo, which, Scott said, ensured a profitable margin.

Benchmarking has proven a powerful tool for the business, with Scott’s operation included in a group of ten agribusinesses analysed over the past 20 years.

“Benchmarking really does filter out a lot of distractions, and helps us focus on our goals,”

“Agriculture is so seasonal and market driven, you often miss being told the full picture, but benchmarking is an extremely useful way to assess business performance over the long-term.”

A third-generation grazier on the island – Scott’s grandfather, Ross, drew a soldier-settler block and his parents, David and Kath, established the current property in the 1970s – this dynamic operation is now at the forefront of Tasmania’s agricultural ‘revolution’.

Traditionally sheep grazing country, dwindling market prices, an inter-generational change-over on many local family farms, and the prevalence of footrot and lice has driven a significant shift to cattle over the past 15 years on Flinders Island.

The increasing scale of family farms on the island has also contributed to the overwhelming transition from sheep to beef production.

The Anderson’s have expanded locally three times over the past ten years, their operation, Killara Pastoral, now spanning across 2,200 hectares on Flinders Island, plus 200 hectares in north east Tasmania.

The couple, together with their two near adult children, run 3,500 cattle, including 1,750 cows.

Tasmania’s ‘clean and green’ reputation has enabled the Anderson’s to remain profitable, capitalising on the premium market, despite the high cost of doing business within the local industry.

“Processing in Tasmania is more expensive as the works are smaller, and we need to be very organised selling our cattle – boat space is limited, as is processing space – so there’s a lot of planning involved to make all the logistics work.”

Yet despite COVID-19’s disruption to a number of southern meatworks, Scott said the season has been incredible.

“We’ve had an extraordinary Autumn, and the past two years have been above average also – we’ve fattened more cattle in the past 18 months than ever before, which is encouraging.”

“We have a fantastic working relationship with Rabobank and Helene, she is supportive of our intentions and it’s reassuring knowing the bank shares our aspirations.”

“No one wants their bank manager ringing constantly, but you want to know that they’re instantly accessible in times of need, which we’re very grateful is the case with Helene.”

While Scott shies away from creating his own branded beef ‘we’re grass growers and farmers, I’ll leave the marketing to the experts,” - he has embarked on a bull breeding program in recent years.

“We believe we can breed our own genetics at a more attractive price point, and now, in our third year of the program, we’re very happy with the drop of bulls this year,” Scott said.

And it’s little wonder the Anderson’s look to the future of Tasmanian beef with enthusiasm, with bountiful production capability, an efficient supply chain and premium protein product, the rolling fields of Flinders Island are as profitable as they are picturesque.