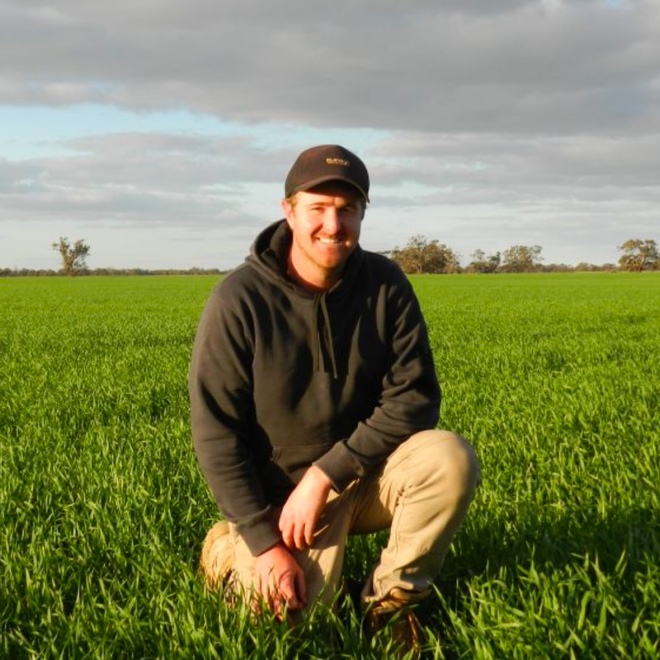 This month BCG caught up with Narraport Young Farmers Brayden and Rhylie Botheras, for a socially distanced interview over the phone.

The brothers from Narraport and the third generation to work the family property.

Rhylie and Brayden (Bobbo) have already helped expand the operation purchasing another block to the east in 2018.

Can you give us a bit of background on yourselves and your operation?

B: Well the farm is called Highbury, our parents Trev and Jen live on the house block, Rhylie lives on a property about 5kms down the road and my wife Amy and I live in Wycheproof. We’ve got about 3600ha cropping land around Narraport, between Wycheproof and Birchip..

R: We run a mostly cropping program, but last year we managed to convince Trev to run some cross-bread lambs on the stubbles the first time in 10 years or so. Because Trev hates sheep. We also hobby farm a couple of beef steers to keep the freezers full.

B: For extra income we run some contract harvesting, spraying and truck cartage. I’m also a qualified sparky and Rhylie is a chippy.

So, when did you start working full-time on the farm?

R: I always wanted to come back straight to the farm, but I did my building apprenticeship in Donald first. I came back mid-2016.

B: I always had an interest in the farm from leaving school. There probably wasn’t the full-time work on the farm back then, we didn’t have as much cropping land. I spent 8 years working as an electrician before going back on the farm. I was still involved in the farm while I was a sparky working harvests and helping Trev whenever I could. I started full-time on the farm in 2017.

What was the driver behind the decision to get trade-qualified?

R: Dad put his foot down. He wanted both of us get a trade under our belt before we came back. It was a pretty wise move to be honest. Having a off-farm source of income came in handy 2018.

B: Trev is a mechanic and I think he’s seen the benefits that come from having a secondary skill set. Particularly when it can provide a use in the farming operation. We know that some years it’s we aren’t going to be as profitable as we need to be to support three families and keep growing the operation and we can fall-back on our trades to keep the money coming in.

Have any of the skills you learnt in your trades been particularly useful as a farmer?

B: I still use basic electrical skills on farm, but mainly trades give you an understanding of good workmanship and problem-solving skills. You also develop people skills, dealing with different people all the time.

R: It came in handy when building the new work shed. We put it up ourselves instead of paying someone to do it, Bobbo did the wiring. The practical skills and general hands on stuff you get from learning a trade is always handy – you learn to think about the job. It was smart by Trev – he didn’t have to put up with us when we were useless just out of school – somebody else taught us how to think about the job.

How do you find working as a family operation?

B: The family operation seems to work well most of the time. There are always a few disagreements, usually at harvest, when we’re flat out.

R:  The disagreements are usually between Dad and Brayden, I just sit back and watch. We get along pretty well to be honest – we know what we are trying to achieve and we get on with it.

Do you have specific set roles?

B: We work together during the year to get the crop in, Rhylie does the bulk of the spraying and I do the sowing and fertiliser applications.

R: It works well to have set responsibilities – after we work out the rotations, I can set my own spray program for the year. I usually take a header to Kyalite to run a contract harvesting operation with 2 headers and a truck.

B: I often get the job in the B-double carting to Melbourne which isn’t too bad. Trev calls most of the shots still.

What has been happening on the farm recently?

R: We’ve been tidying up the broad leaf spray on cereal crops recently, the spray program is pretty much up to date now, but it won’t be long before we’re at it again. I’ve just had surgery on my shoulder, so it’ll be up to Dad and Brayden to keep things moving for a bit.

B: There’s some rain forecast, so I’ve just picked up a load of Urea and we’ll be trying to get that out as soon as possible and then hoping the rain comes down. The crops need a drink, so we’ve got our fingers crossed.

What are the challenges you’re seeing now, there’s always something you’ve got to keep your mind on?

B: This year the mice have giving us grief, also chemical resistance is another huge concern, which we will have to work abit harder on in the coming years.

R: The red legged earth mites gave the canola a thrashing early in the season but I think the biggest concern now is frost and lack of rain to try get them moving. Anything we’ve sown late is behind where they were this time last year

R: We try and stick to pretty set rotations on paddocks to control the weeds, but everything is decided after summer rain fall. We monitor the soil moisture and the plant available water and make a call on the best option to make the most out of the year

B: We’ll see how this season pans out, but I’d like to try and get some more on-farm grain storage to try and take the pressure off the truck at harvest.

Who do you rely on for advice?

B: We usually bounce ideas around between Rhylie and Trev and I to see how we can collectively come up with a solution. We have a few young neighbours out this way who we work with as well when we’re stumped.

R: We usually end up going back to Trev for his thoughts. He’s knows the land and he’s set on the way he wants the farm to operate. Our agronomist is Al Ferrier who usually gets a fair few phones calls and we get the BCG Technical Bulletin every fortnight.

And lastly, what is the best advice you’ve been given as a farmer or in life?