Bale shape and ease of maintenance key for Scott Somers 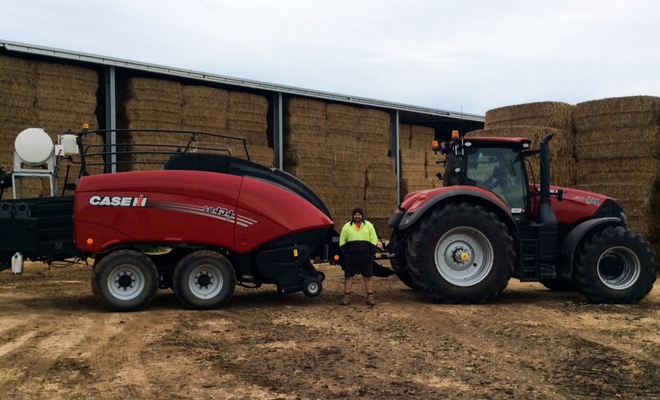 A dramatic increase in hay demand recently has been well documented, with extended periods of drought exacerbated by bushfires through the summer. During this time Warracknabeal farmer Scott Somers has seen his own hay production increase from 30% of his 4000 hectare mixed farming operation, to nearly 80%.

“We were fortunate to get some reasonable seasons here, so our production has been quite high. Drought has had a small impact on our demand, but the main driver has been an increase in clientele,” explains Scott, who adds that about 70% of oaten hay production and 50% of straw production is exported. This export demand has ensured hay continues to be a major part of Scott’s operation, but he’s quick to point out that the drought is far from over in some areas.

“I feel really sad hearing people say the drought is over. We recently delivered hay and straw to Broken Hill and south west Queensland and it’s still devastating out there. We certainly haven’t slowed down and the variety of customers is broad.”

With hay accounting for such a large part of his operation, reliable, efficient machinery is important to Scott. He purchased his first Case IH Large Square Baler in 2017 and has been so impressed with the technology that he’s just added a second LB434S XL to his fleet.

“We get great consistency in bale shape and dimension with the LB4, they make a very square brick and compared to competitors they’re cheaper to buy and require very minimal maintenance,” explains Scott, who has been pulling his newer LB4 Baler with a new Case IH Optum 270.

“The Optum 270 is a very user-friendly tractor on a baler. The cabins are comfortable in terms of the positioning in the seat and where things are situated, a short wheel base means it rocks a bit smoother and turns well, and the suspension makes it very comfortable,” said Scott, who plans on adding another Optum in the near future.

“You’re doing a lot of applications in one go. You’ve got to harvest by cutting, it’s got to be raked, stacked, carted. And when you’re doing that over a large area and a large number you have to have a lot of equipment working effectively,” explains Scott. Fortunately he is well supported by his local Case IH dealer, O’Connors.

“We have a fantastic relationship with O’Connors, if I have a problem they do everything they can to make sure I’m up and running 24/7,” says Scott.