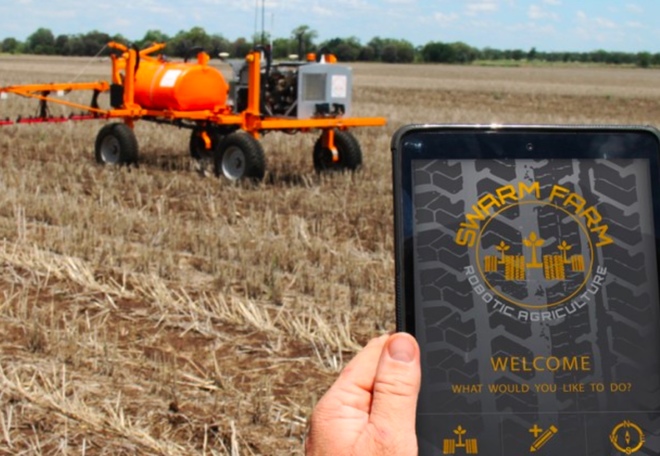 Our vision has always been as clear as day.

Nothing has changed for us regarding our mission - we want to create better farming systems and bring the world the power of autonomous agriculture, combined with human knowledge and expertise.

My entire background is farming. It’s where I grew up, it’s my passion and it’s my family’s passion, I studied agronomy at the University of Queensland, and I spent some time as a field agronomist working in cotton and grain crops and horticulture before coming back to the family farm. I have 22 years of experience under my belt, and I know the industry as well as I know the soil.

We grow chickpea, wheat, barley and mungbeans, and we also run beef cattle as well. We've grown a fully fledged commercial farming operation, we've been successful in a farming business and we’ve been high performers in terms of efficiency and the practices we use to grow crops.

But the catalyst to starting SwarmFarm was about seeing where farming goes wrong as much as where it goes right.

In a quest to be more efficient and save on labour costs, farmers have all started buying bigger and bigger farm machinery. And there’s been a revolution in all that gear; they could farm more land with less people. But I’ve come to realise that the sheer weight of these machines, and the fact that they’re so large and heavy meant that we didn't grow crops as well as we used to.

I knew that if we could get to robotics, we didn't need to be big, and cumbersome, we could build lightweight machines that didn’t damage the soil - and we could actually design machinery that grew crops in the best possible way.

I love building things. I've always enjoyed welding up projects with machinery in my shed, playing with electronics and taking on ambitious projects that I didn’t always know were actually going to work. I was excited about the idea of joining that passion with my love for farming.

This was back in the early, early days of autonomous robotics, and we were working with a clear blue sky. It was before Google’s driverless car had ever made headlines, and before companies like Uber existed, back when you couldn't pop into Harvey Norman and buy a drone on your way home from work

We looked around and explored what technology was out there for autonomous robots and we started to form partnerships with universities, where we were able to springboard across all the success in Australia with mining robotics. We partnered with two universities and received an Australian Research Council linkage grant, and we started to develop the technology that would become SwarmFarm today.

Getting farmers back into the fields

These days, a lot of what we actually do as farmers, when we are sitting in our modern tractors and farm machinery doesn't really have that much to do with farming. We’ve learned how to be excellent machine operators, but that’s not necessarily a key farming skill. When you're sitting in an air conditioned cabin in absolute comfort, in a tractor that's worth half a million dollars, you're not actually farming, you're just playing on your iPhone checking the weather or your favourite social media apps. Occasionally you're checking what’s happening with the implement hooked onto the back of your tractor.

I actually see robotics as a way of getting farmers back out in the field with dirt on their boots, out of the air conditioning and focusing on the environment that we grow in, the health of our crops and soil that supports the crops we grow. Because that’s what it’s really all about.

So much of modern farming is based around an “answer in a can”. We're looking for the next product to spray on our crops because it has been pesticides that has supported the last 30 years of productivity gains on our farms. But every farmer can see that over-reliance on chemistry is breeding resistance in our weeds and pests to the agro-chemicals we use, and we're heading for a cliff face. Once those products stop working, we can’t go back - we have no alternative to rely on, and we’ll lose 30 years of farming progress.

But back in 2010, when SwarmFarm was first conceived, we had a vision that if we could get robotic technology onto farms, we could start to bring new field practices into play - new techniques to grow crops that were not considered possible on a tractor where we could actually reach a new level of sustainable farming.

Our why: better farming, a better way

Our goal is to actually design technology to grow the best possible crops, rather than technology that would automate and remove humans. That’s an ethos that has stayed with us from the day we started SwarmFarm. We set out to create the new farming systems of the future.

SwarmFarm Robotics, in less than a decade, has proven to the world of agriculture how beneficial the implementation of robotic, autonomous technology can be. The future looks bright - and we can’t wait to show you what else we have in store for the world of autonomous agriculture.