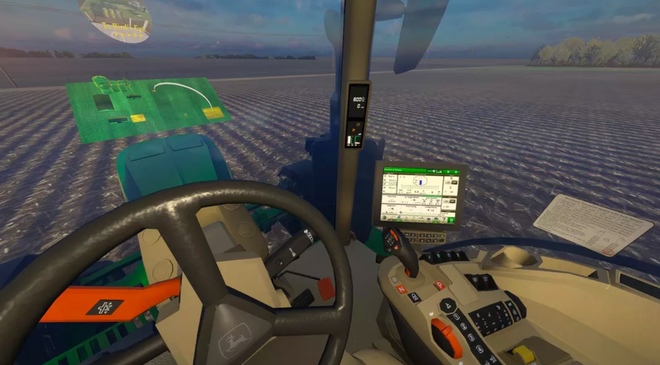 John Deere is sending VR headsets with virtual tractor demos for CES 2021, as the tech industry tries to figure out how to make virtual product demos feel real.

As soon as I hit play, the shed doors bearing the words "John Deere" open to reveal a bright green tractor. As it rolls toward me, the tractor quickly swerves to reveal what it's towing: a large planter with green arms and yellow buckets. (These are called row markers and seed boxes, respectively, my lifelong farmer father and eight-year-old, farmers-in-training nephews tell me). Soon the markers expand, showing me just how massive the machine really is.

The video is a glimpse into a virtual reality demo the storied farm equipment maker is planning for CES 2021, which starts next month. John Deere plans to send VR headsets to reporters, with the goal of virtually transporting them to a farm to see the company's products at work during planting season. Offering something visual for media is key for translating just how big Deere's products are -- and educating people who aren't familiar with agriculture.

"We want to take you from where you're at and feel like you're someplace totally different," Jon Ebert, manager of John Deere's public and industry relations team for North America, says in an interview.

John Deere will distribute Facebook's $299 Oculus Quest 2 goggles, which operate without a wired connection to a computer. Designing the VR experience, sending the devices to users and other associated costs were less than exhibiting at the Las Vegas Convention Center, Ebert said. John Deere's budget for CES in 2021 is about 75% of its normal CES expense.

CES is one of the biggest tech shows of the year and draws thousands of people from around the globe to Las Vegas, where they can see the newest innovations in tech. Last year's event attracted 170,000 attendees and 4,400 exhibitors across more than 2.9 million square feet of exhibit space in 11 official venues.

The coronavirus pandemic has forced CES to go all virtual this year. The conference will take place from Jan. 11 to 14, and expectations for the amount of news generated by the event have been scaled back compared to previous years. CES 2021 is unlikely to look anything like the gatherings held in earlier years.

CES 2021 is the latest example of a hurdle that Deere and others in the tech industry face when it comes to events: Making people feel like they're experiencing products in person. Interviews and briefings can be handled by video conferences, but demo rooms simply don't translate to Zoom. For big conferences like CES, the convention center floor is a key part of the show. Attendees can walk from booth to booth, seeing the latest in tech and finding hidden gems among the hundreds of exhibitors. Without the serendipity that freedom-to-roam affords, smaller companies will find it hard to get noticed. And even big companies may discover it's difficult to demonstrate what products are like if they can't be seen in person.

While participants generally liked the virtual rooms, the companies haven't said if they'll do something similar for CES.

"There will be interactive mechanisms to ask questions, schedule meetings, these kinds of things," says Steve Koenig, vice president of research for the Consumer Technology Association, the organization hosts CES. "At its heart, that's what CES is really about, bringing industry together for conversations and leading to business or news stories or whatever it is."

John Deere is relatively new to CES. The farming equipment company exhibited for the first time in 2019, an effort to introduce itself to a new crop of potential customers and media. While the company is best known for its big green tractors, it has also built operations in artificial intelligence and even purchased 5G airwaves to install next-generational cellular technology in its Iowa and Illinois factories.

Deere's technology push is all about precision agriculture. Farmers want to find out -- nearly down to the individual plant -- what's happening with their crops during the planting process, the application of fertilizer and harvest. They want to know if a certain seed performs better than others or why a part of the field ended up with poor yields. Precision agriculture uses mapping satellites and other technology to let farmers know what's going on in the soil, letting them be more efficient with gas, fertilizer and seeds.

In the Midwest and other crop growing regions of the US, self-driving tractors are commonplace. (The farmer still sits behind the wheel.) Sensors can detect what the machine's doing, what the crop conditions are and everything in between. Farmers can monitor the progress of planting and harvesting from their iPads, and tractors serve as their own mobile hotspots. It's a specialized reflection of our own increasingly connected world, except farmers have used many of those technologies, like auto-steering and GPS mapping, since the '90s.

Deere wants people beyond farmers to know about the advances in agricultural technology. But don't expect the announcement of a new tractor or AI system at CES. The presentation will be more about education than newly released products.

"We're using CES to make sure that we're generating awareness of the technology that John Deere is envisioning to take this immense variability for farmers [and] make it more predictable," Ebert says.

At its first CES, the company focused on harvest. It displayed a combine, which collects corn and other crops from the field. Last year, it featured a sprayer, which applies chemicals to fields.

This year's focus is planting. "As we go through the VR experience, it will ... show how technology is important in this step because this step helps make … the next job smarter," Ebert says.

Down to the seed level

Viewing something in VR isn't quite like experiencing it in person. But virtual reality has a big benefit over the real world: it can take you to places you can't enter in reality. For John Deere, that's farm soil.

The company's VR system will show the "journey of the seed," Ebert says. While the tractor and planter weigh "upwards of 40,000 pounds," they cause little disruption to the soil when planting seeds. Deere VR users will get to see that.

"You're never going to be in a soil pit ... watching a planter go over the top of you," he says. "But as we think about trying to highlight the different complex processes that are happening and the technologies that go into planting the seeds, this allows us to have a vantage point to see all of that come together."

Users won't be driving around virtual tractors, playing games or going on any sort of choose-your-own-adventure with Deere's systems, at least not in VR. Instead, the demonstration will feature guided hotspots inside the software that users navigate to to learn about Deere technologies. The company will have an interactive planting game on its website.

"2020 has thrown curveballs … for everyone, and this has been an opportunity for us to take a look at how we can do things more unique," Ebert says.

After the planter booms expand, I'm quickly transported to what appears to be a hole in the ground. As I look up, a tractor speeds toward me, driving over me before I can react. Turns out I'm not a farmer in this part of Deere's demo. I'm among the seeds, watching the planter and its companion connected technology do its job. And I'm really on my couch.