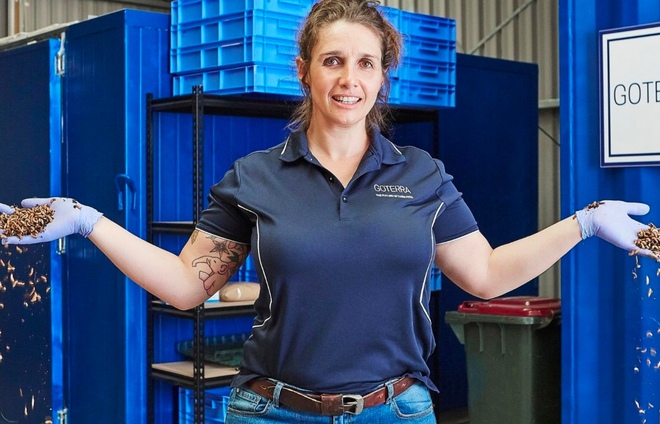 Just before Olympia Yarger was about to pitch her startup, she knew she had failed. It was precisely two presentations before her own when she realized her pitch was completely wrong. Until then, she had been confident. But now, she felt devastated.

It was her turn… there she stood in front of the crowd at Rabobank’s Foodbytes in Sydney in 2016 in front of hundreds of farmers and agribusiness executives, delivering her pitch while trying to fix it up, as she went.

She was right, it did fail. But little did she know, it was the start of what would become a multi-million dollar investment in her business.

“That pitch to me, it was horrible,” Olympia Yarger told Evoke Ag’s podcast.

“All I thought of then was the white noise in my head. That pitch was the most uncomfortable, but most important pitch of this journey,” she said.

After the pitch, a question came from a man in the crowd. And she fumbled that too.

“I didn’t even get it right. I couldn’t answer the question. There was so much happening on that stage all at once — the readjustment of what I knew, determination to fix it and the ever-invading imposter syndrome, ” Olympia Yarger said.

“All I really wanted to do at the end was to go and talk to him and ask him what the hell I got wrong and how the heck I could fix it… and so I did that.”

It was a good thing she did, because that’s how she met Matthew Pryor and Sarah Nolet, who would go on to co-found an agritech investment firm called Tenacious Ventures.

That nightmare pitch eventually ended up in an $8 million dollar investment in her startup business, Goterra, a food waste management system which uses black soldier fly larvae (or maggots) to process waste into animal feed.

The partnership is set to scale Olympia’s robot-automated insect farms from converting 10 tonnes of food per week … to up to 45,000 tonnes by 2021.

So how did such a horror pitch — end up in success?

It all happened through building relationships with the right people. But if you’re a startup, how do you even begin to do this?

1. Before you pitch: You need a strong business model and founding team.

Matthew Pryor: The way those pitch prizes work — you get to look at a written version of the business to assess who gets to pitch. And really as soon as I read the description of Olympia’s business, there was something immediately compelling about it.

When we saw Olympia pitch, we saw that Olympia had the makings of an exceptional founder. And those are the two ingredients of the formula that we’re looking for: a business model insight that unlocks a new way of getting things done in the hands of a founding team that is going to be singularly focused on making that thing true.

2. Pitching a startup is different to starting a business.

Olympia Yarger: In that horrible moment I pitched, I realized that having a startup is not what you imagine it to be. I had started businesses before, but that is not the same as having a startup. I didn’t realise that contextually.

I had done so much Googling to understand what slides I should have. I had read the Guy Kawasaki 10 Slides, all of those things.

What I couldn’t grasp from watching those things on Google, was being in a startup and being in the startup ecosystem — there is a cadence, there is almost a style to how you should pitch.

3. Network with everyone and anyone.

Olympia Yarger: Relationships are the number one thing. I think people believe that networking is only about the people who you believe can help you, or people who are in the industry you are trying to enter.

But I believe that’s untrue. I think when you network you need to be attentive to the whole of the conversation and not try to pick and choose people. Like, it can be really difficult at conferences where you are trying to speak to this one person who you think can get you an introduction to another person — and you think that’s strategic.

But I have historically found that the people who want to speak with you, whether or not you believe them to be as important to your cause as that one person who‘s connected, are actually more important.

Because, in a startup you have to build champions. You have to build a following of champions- people who believe what you are doing is good. And those people may not have anything to do with your industry or the people you are trying to influence. But it’s that ripple effect and that groundswell of noise that’s happening around your company that’s more important at that stage.

Particularly in agtech startups, I’ve noticed we just tend to stay in ag. We just stay within the known players within the industry and who we believe to be important.

But people who aren’t in the industry and who could be champions from different perspectives and different angles are so much more important.

4. Understand what’s in it financially for the investor — and if that matches your goals.

Matthew Pryor: The first thing founders need to do, is to know where they want to end up. Because the kinds of investors that you want are the ones that are heading the same place you’re heading.

One of the challenges is thinking that investment is just about money and who has money.

Some investors are buying a share in a business because they expect, eventually, they can sell their share for many times the amount of money it cost them to buy it.

So if you don’t know where you want to end up, you can easily match yourself with the wrong kind of capital because your investors might be looking for different outcomes than you are.

5. Think about the interests of your potential investor.

Mathew Pryor: Understandably a startup is thinking about how to solve this big hairy problem. And often, in fact it may be a defining characteristic of a startup even, when a founder decides to start their business, that what they’re looking to do isn’t currently possible. So it’s often the case that founders spend most of their time thinking about how to do what they want to do.

But investors are not thinking about the same problem. So some advice would be to read as much as you can and inform yourself about what the people on the other side of the table will be concerned about. Because it’s a bi-directional thing- it’s a relationship, and being successful in a relationship very much requires you to understand what the other party needs as well.

If you’re an agrifood tech startup looking for funding, tell us about yourself here.