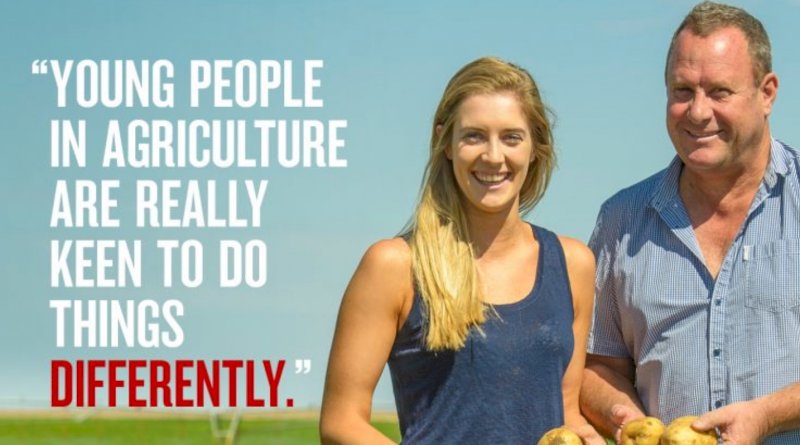 A new, younger generation of Australians is choosing life on the land… and that promises to bring exciting, innovative times for Australian agriculture.

Renee Pye, marketing and new product development manager for Zerella Fresh, is one of the bright new faces shaking up Australia’s agribusiness sector.

Her family owns The Pye Group – a large-scale, multigenerational commercial farm that produces one in every four carrots and onions sold in Australia. But the 27-year-old is determined to make her own mark. With professional credentials in business management, she is among a younger generation bringing a renewed focus on innovation and sustainability to agriculture.

“Young people in agriculture are really keen to do things differently to how their parents or their grandparents did it,” Pye states.

“There’s a real focus on the ecosystem of the land you’re working on and making sure you treat it right and building up the properties in the soil. It benefits the business because you get better yields, but you’re utilising the land how it should be – helping it thrive.”

Young people are an important and growing segment of Australia’s $66 billion agricultural production. Now making up almost one-quarter of the workforce, they often have more educational qualifications than their predecessors and are highly sought after as the industry’s future.

Amid post-COVID-19 internal migration changes that, according to the Regional Institute of Australia, have increased Australia’s regional population by more than 42,000 extra people, there are hopes more Gen Ys and Gen Zs will choose to join the industry’s ranks.

And that industry is a big, growing global business. Exports make up around 70 per cent of Australia’s agriculture, fisheries and forestry production and demand from Asia is tipped to double from 2007 levels by 2050.

The Australian Bureau of Agricultural and Resource Economics and Sciences says this will provide opportunities for future exporters of high-value, high-quality agricultural and food products.

New approaches for an age-old industry

Australia’s new generation of farmers and producers are harnessing their university credentials and access to a global market of information. They are changing the sector through innovation, big data, land regeneration and contemporary thinking around finance and marketing.

“They don’t care for the typical stereotypical view of what agriculture looks like and are happy to take a non-traditional route or pathway to work in the industry,” she says. “They are open to trying, exploring, and will consider values and ethics into their decision–making and career choices.”

She says capacity-building programs such as AgriFuture’s Horizon Scholarship Program reflect a change in farming, with an increasing diversity of participants. A decade ago, she explains, participants were “stereotypical agricultural science students” from agricultural backgrounds. Now there is more of a mix.

“We have young people from the cities, people with no direct connection to farms or agriculture experience, and we’ve got people studying across a more diverse array of fields – accounting, economics and engineering degrees as well as science and agriculture,” she says.

Here, Allitt points to the contemporary approaches of various young farmers. There’s veterinarian Amy Munro, who won this year’s Agricultural Student of the Year at the Australian Farmer of the Year Awards. Her study into the experiences of gender in veterinary science is now being used as the basis for upcoming mental health projects.

Or self-described ‘agvocate’ Callan Daley, a recent recipient of the Evoke Ag Future Young Leader award whose speech about misconceptions of farmers and “the unintentional degradation of agriculture” as a profession went viral.

Bringing innovation to the farm

For Renee Pye, one of her major roles is the marketing and distribution of the innovative and enormously successful low-carb potato Spud Lite, around 200 250 tonnes of which are sold weekly through Australia’s three major supermarket chains.

This success follows on from a global search, by Pye’s father, Pye Group Managing Director Mark Pye, for a great-tasting, multi-use potato that would flourish in the hot climate of South Australia’s Mallee region. That search eventually led to a European varietal that today is grown at scale in the Mallee.

There are also other innovations under way across the group’s $100 million operations that, along with all those carrots and onions, supplies 17 per cent, or about 120,000 tonnes, of Australia’s potatoes.

These include the group’s fully automated carrot-packing process – dirty carrots are tipped in at the start; a washed, cooled, temperature-controlled, sealed bag comes out at the other end.

“There is a bit of a process behind it,” Pye says. “With carrots we’re always trying to find better-tasting varieties or carrots that are more appealing to the consumer in different ways. We’re looking at different varieties of cooking them, we’re investigating a microwave bag or with flavoured butter.”

Onions are also subject to a high-tech quality and consistency process, where an infrared camera takes a picture of every onion during sorting to check if it is shooting or rotten inside. From there, the produce is packed without a human touch.

Other plans are on the horizon, with Pye investigating carbon credits and linking up with other young farmers to share ideas and practices.

“The younger generations tend to think differently about the way they work the land and how they utilise the land,” she says. “These green practices really help to change the mindset of the way farming can be done.”

Seeing the new thinking and innovation of young farmers is inspiring, says NAB National Agribusiness Strategy Executive Bel Quince, and the bank is doing its part to enable their vision.

“We understand the important role the next generation is already playing to shape agribusiness, and that the financial sector needs to adapt to support the changing needs of this new breed of farmers,” Quince says.

“Among other things, we have a dedicated regional and agribusiness graduate program and career paths to ensure our young bankers can work closely with and support the next generation of farmers.”