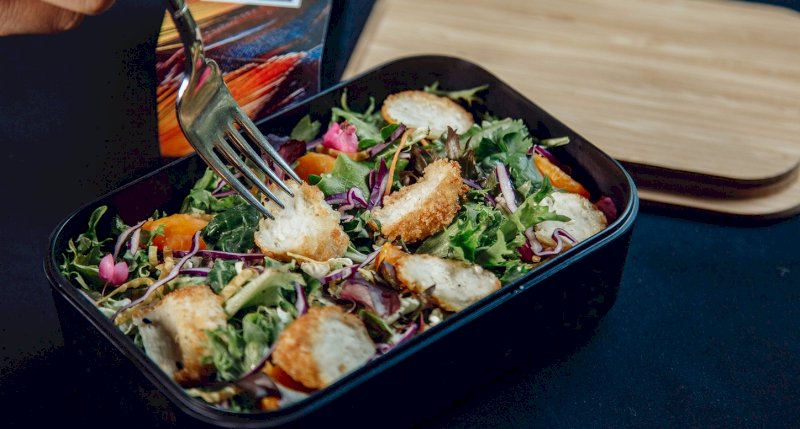 Vow Co-Founder and CEO, George Peppou compares the cultured meat movement to the revolutionary arrival of computing giants Apple and Microsoft in the 1970s – a large number of people are passionate believers, he said, but others believe it’s ‘too futuristic and won’t happen’.

“We’re at that turning point where biology and biotechnology companies can change the material world, in the same way that computing and the internet changed the information world.”

George and his Co-Founder Tim Noakesmith have a simple mission for their Sydney-based startup: ‘To make sustainable food both irresistible and available to billions of people’. Launched in 2020, Vow has already attracted A$7.7 million in funding from venture capitalists to tap into a multi-trillion-dollar global market for protein.

Cultured ‘chicken’ for sale but Vow not copying

Cultured meat products are advancing to market at a similar speed. In December 2020 the first cell-cultured chicken nugget, GOOD Meat was approved for sale in Singapore. Produced by US company Eat Just – renowned for its JUST Egg brand – is now served at Singapore’s Madame Fan restaurant and delivered exclusively via food delivery platform, foodpanda.

US-based UPSIDE Foods hopes to sell its cultured chicken by the end of the year if regulatory bodies allow it, and SuperMeat in Israel is serving cell-cultured chicken burgers within its processing facility and plans to widen its reach over the next few months.

But Vow is not intending to ‘copy’ the most commonly eaten meats – chicken, pork and beef. George said they don’t see the future of protein as being about the animal, but about the sensory, nutritional and functional properties of the food.

“We’re going to see a lot of products which are not just a single animal. They’re going to take properties from multiple species – think of mince which looks a lot like beef mince but has the nutritional profile of a salmon fillet with some of the flavour coming from, say, duck fat.

“We’re going to mix and match properties using cells and other ingredients to create different types of flavours and textures and nutritional profiles to serve consumers in different ways, that are both very healthy and tasty,” said George.

During a demonstration partnership with Neil Perry from Rockpool – one of Australia’s greatest chefs – a variety of Vow’s exotic cell-cultured meats were used in a first-ever culinary trial to create six unique dishes. The following featured:

‘Library’ of 11 animal species to mix and match

In order to offer the widest possible range of foods, Vow is building a ‘library’ of cells from both domesticated and undomesticated animals that are catalogued based on how easily they can be produced in large quantities and how they perform as foods.

“Think of this as a palette of paints, a palate of ingredients that we can use to create compelling and desirable products. Right now, we have 11 species in our library and we’re about to grow that fairly substantially. So if there’s anyone with an exotic animal that they’d like to introduce, we’d be very keen to have a chat,” said George.

Scientists take a small, almond-sized biopsy from the animal and break it into different cells of muscle, fat or connective tissue which are stored in liquid nitrogen. One biopsy can produce large volumes of cultured meat in bioreactors, and it’s this process that George says will empower countries that have limited access to agricultural land.

“One of the really compelling aspects of cultured meat is the ability for these facilities to be built right next to population centres in regions and countries that don’t have the land to produce grazing animals or even intensively farmed animals.”

“Full disclosure here, I am a meat eater – and I certainly do enjoy a steak every once in a while,” explained George.

“When I think about livestock farming there are extensive and regenerative systems like a lot of the Australian grazing systems which I do think have a long-term place in our society. Then there are intensive farming systems, especially in countries with less stringent agricultural regulations [outside of Australia], and when I want to compete with something, I want to compete with those.”

“The environmental benefits are also significant – we have a much, much smaller land footprint, use less water and emit less greenhouse gases.”

And he said price parity with traditional proteins may not be too far away.

“The Just chicken nugget is A$23 per nugget in Singapore, which is a hell of a lot of money for a chicken nugget, but it isn’t thousands of dollars.

The team at Super Meat are talking about several dollars per chicken burger, which is incredibly impressive technology by them, but the starting price point for many of these products is only a single-digit multiple above the cost of a conventional animal product.

“10 years from now the majority of cultured meat will be available for the same price, if not substantially lower, than comparable products in supermarkets in Australia and other countries in the Western world.”

Pandemic boosts technologies to scale up

One unexpected bonus of the COVID-19 pandemic has been the requirement for technologies to scale up pharmaceutical products such as vaccines, which he said have a lot in common with the processes used to multiply cultured meat.

“Seeing that the scale up process is achievable has given us a lot of confidence, and the availability of talent and facilities has increased over the last year in response to the pandemic. It really is the best time ever to be working on a larger scale biotechnology product because the world is much more capable of scaling up those types of technologies than it ever has been,” he said.

While Australia will always be home, Vow is a global company and George said Asia is the first market they’re likely to sell into, which could be as soon as next year.

“We’ve had a relationship with Blackbird since before Vow was even a company. Sam Wong and I met more than two years ago when I was starting to think about the opportunity in cultured meat. She gave me very direct and helpful feedback and made a lot of really helpful introductions to founders that were working on interesting problems. This helped Tim and I shape our view of what we can contribute to cultured meat that no one else is.”

“The Blackbird team support us in everything from our manufacturing operations and how we think about the supply chain through to how we recruit and communicate with the outside world.”

He added, “Vow is a business that requires a lot of capital to create evidence of market traction but the opportunity is huge, we’re talking about a multi-trillion dollar market of protein globally, but we’re also talking about the potential to have an incredibly positive impact on the environment and on the people who’ll be consuming the products.”

Founding a startup is ‘all-consuming’ but rewarding

As the Founder of GrowLab for Cicada Innovations, the Sydney-based accelerator for agrifood tech startups, George worked with 17 companies for almost three years – garnering valuable tips for success. But despite being well aware of how difficult and all-consuming it would be, he said founding Vow was the most challenging thing he’s ever done.

“Anyone who says startups aren’t an emotionally draining, brutal rollercoaster is lying to you. I went into this with eyes wide open and it’s been significantly harder than I thought it would be, even seeing so many founders and working with them so closely.

“There are two keys to success – the first is being able to tell a really compelling story, and the second is being deeply passionate about the problem and the solution, so you’re able to persevere through the lowest lows and the immense amounts of self-doubt that come with those periods, to push through and build a business that solves it.

“There’s this amazing period where it goes from being an idea to being something tangible over just a few months, and you very quickly start to build evidence and conviction in yourself and in others, and that early proof of concept, everything on a shoestring budget, having to absolutely interrogate and build an enormous amount of conviction about every decision we made, was so much fun and so challenging.”

Future for biotechnology similar to computing

George is excited about the future and believes a lot more elements of our lives and the physical world around us will be influenced by biotechnology.

“When computing became mainstream, it was the point at which it exited the academic labs and started to be the space in which entrepreneurs and hackers were pushing the limits of the technology to create new products and new experiences. That’s exactly where biotechnology is right now.”

“The people pushing the industry forward are not doing so from universities, at the end of a long period of study, they’re people who are starting businesses and working with scientists on biology in ways that didn’t exist even a few years ago.

“Vow definitely falls into this category. Tim and I are non-academic founders and we have a very skilled chief scientist [James Ryall] with 20 years in academia, and that combination of entrepreneurs who want to move fast and really challenge the conventions of how biology is done alongside deep knowledge is incredibly powerful.”