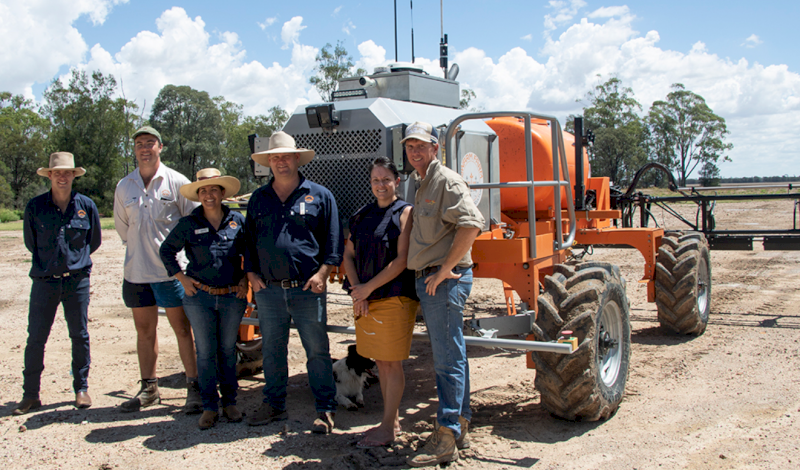 A SwarmFarm robot, ‘Oscar’, has added another dimension to Elton and Pam Petersen’s integrated weed management program, which features the majority of the WeedSmart Big 6 tactics.

In two summer fallows the Petersens have regained control of glyphosate resistant feathertop Rhodes grass (FTR) and awnless barnyard grass (BYG) that was threatening their 2000 ha dryland cropping operation at Moonie, on the Western Downs. 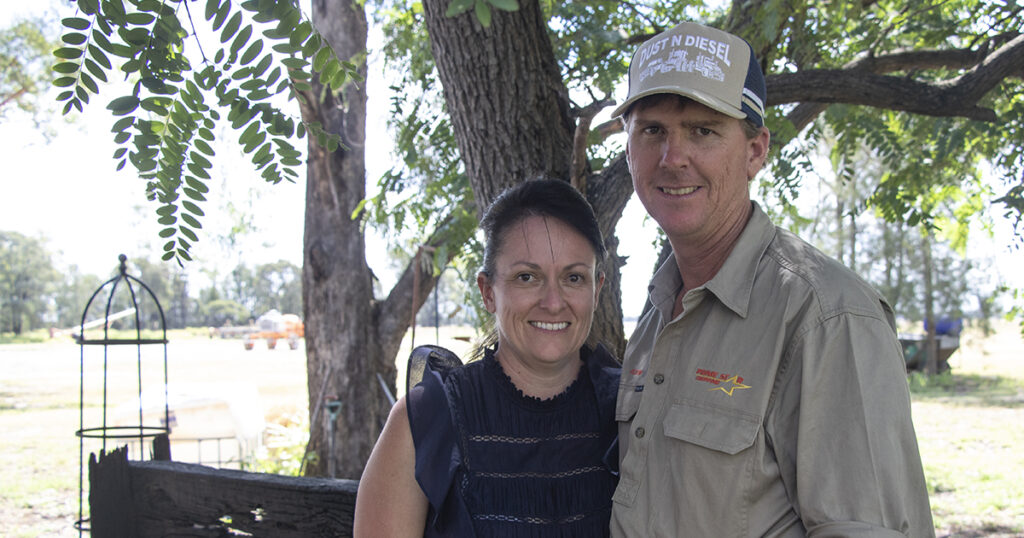 Caption: Elton and Pam Petersen, ‘Traighli’ near Moonie on the western Darling Downs.

The Petersens have achieved this remarkable feat after deploying ‘Oscar’ with a 12 m weedIT boom attachment. In the 20 months that Oscar has been spraying weeds in the summer fallow, ‘he’ has clocked up over 3000 hrs and passed over more than 25,000 ha.

Elton and Pam purchased ‘Traighli’, a 2370 ha grain and cattle property 5 km north of Moonie, on the western Darling Downs, in 2015. Previously they had farmed on the Fraser Coast growing sugarcane, soybeans and pineapples, and running cattle.

At the time of purchase, weeds that adapt well to conservation cropping systems had established populations that were impacting on the profitability of grain production. Elton’s initial plan was to use cultivation and blanket spraying to regain the upper hand, particularly of the herbicide resistant summer-growing grass weeds.

“Cultivation certainly helped reduce weed numbers, but was never intended to be a long-term, sustainable solution to manage these weeds. It was also too costly to use the blanket sprayer frequently enough to prevent seed set,” said Elton. “We were interested in optical spot spraying technology and everyone we spoke to who used this technology gave very positive feedback – except that it was still not practical to spray as frequently as is required to target small weeds.”

After further investigation the Petersens decided to invest in technology that would maximise the efficacy of the optical spot sprayer in their weed control program.

“Our choice was between a 36 m tow-behind weedIT boom and a 12 m weedIT boom mounted on a SwarmFarm robot,” said Elton. “We saw the robotic platform as a way for us to really hit our grass weed problem hard and to drive down the weed seed back as quickly as possible, with minimal operator input.” 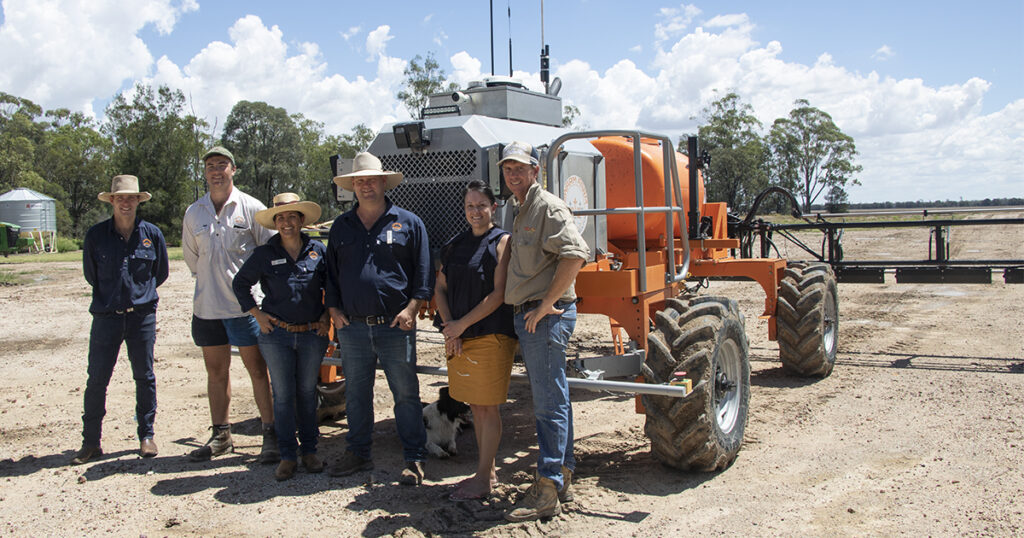 “In such a short space of time we have dramatically reduced the seed bank to the point where Oscar can work for up to 40 hours scouting and spraying weeds without the spray tank needing to be refilled,” said Elton. “This fact alone is incredibly important. It gives us much more freedom without compromising the weed management program.”

Elton has also experienced a significant mind-set change to weed management as a result of deploying Oscar. Applying constant pressure to small, fresh weed seedlings has seen the weed seed bank dwindle as no new seed has been produced for two summers.

When blanket spraying, Elton knew he was compromising on water and chemical rates in the interests of saving money and time. He said the focus was always on trying to make the spray operation more efficient and this often resulted in some weeds being larger than ideal when the herbicide was applied.

“With a tow-behind optical boom we would have improved our chemical and water application rates but not solved the frequency and consistency problem we had with the blanket spray system,” he said. “Automation brings the consistency. If Oscar goes out spraying and finds only a few weeds it only costs us $0.50/ha in diesel, and we are paying for the machine whether we use it or not.”

In the 2020/21 summer fallow, chemical costs totalled just $12.80 per ha for all the summer weed control and the pre-plant knockdown spray. Elton says this is equivalent to the cost of a single blanket spray in the past.

“In our old system we were never on top of resistant weeds and although the new system probably has similar costs, we are achieving a much better result,” said Elton. “We have essentially invested in technology that does a better job with less chemical – the long-term benefits have been realised more quickly than we dared to hope. The saving in chemical cost is even greater than I expected.”

In the 2020-21 summer fallow Oscar completed seven passes of the whole farm between mid-November 2020 and May 2021. For the 25-week fallow period, the property received around 650 mm of rainfall (more than the annual average for the property), with the longest stretch without rain being just 10 days. Being able to send Oscar out spraying almost immediately after rain has allowed the Petersens to treat each new germination of weeds while still very small. Elton also has Oscar set to only spray when the conditions are cool, to maximise herbicide uptake.

BYG sets seed very quickly, even quicker than FTR, so there is no opportunity to stop seed set other than killing the seedling before it seeds. Elton believes he is on track to eradicate both of these grass weeds within the next few years and will be able to reduce or eliminate the use of Group A herbicide in the summer fallow.

He says they are currently applying Group A herbicide in three passes, but each round is only using one drum of Group A product, across the 2000 ha cropped area.

The other fallow sprays are glyphosate immediately after harvest and after the first rain (for crop volunteers) and then the pre-seeding knockdown.

“The glyphosate / paraquat double knock has been replaced with frequent spraying using the robots to target small, fresh weeds,” says Elton. “There is limited opportunity to double knock as each paddock is sprayed roughly every 21 days.”

“This property is heavy grey cracking clay soil and melon hole country, so we have really noticed a difference in being able to access the paddocks with such a light machine much sooner after rain than is possible with a tractor,” said Elton. “Everything is centred on hitting weeds when they are very small and at their most susceptible to herbicide. This has resulted in a large reduction in the amount of chemical used.”

Another feature that Elton uses to enhance the efficacy of the pre-plant herbicide treatment is to slow Oscar down and increase the sensitivity of the optical detection to ensure that the very smallest of weeds are ‘seen’ and sprayed. This essentially saves them the cost of a pre-plant blanket knockdown. 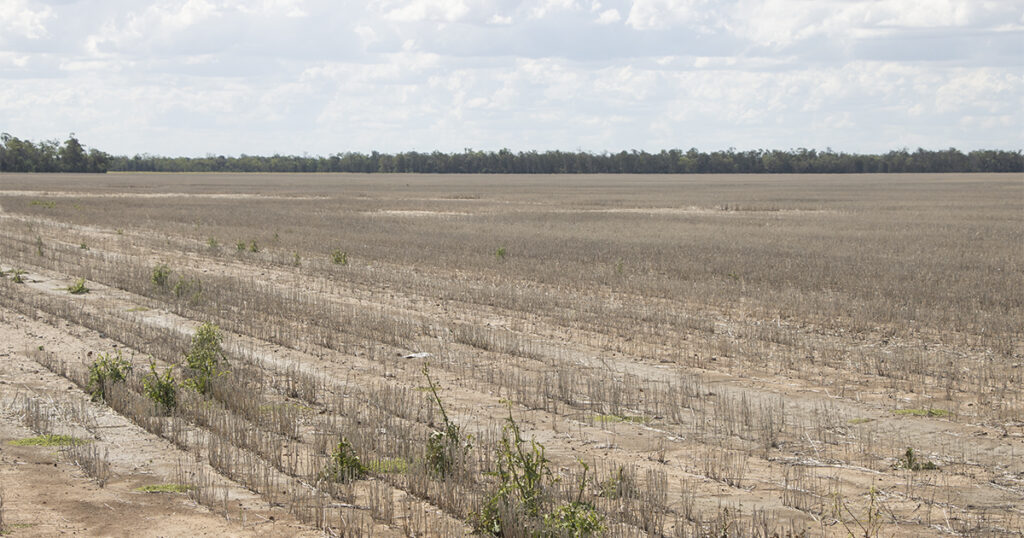 Caption: Very clean fallow in the background compared to two passes that were missed due to an error in the robot’s instructions.

The Petersen’s winter cropping program is limited to growing chickpea, wheat and barley, so although they rotate the available chemistry, their options are restricted. When the opportunity arises they plant a summer crop followed by a winter fallow to target black oats and phalaris.

“We do one in-crop spray in wheat to target these grass weeds and are aware of the risk of Group A resistance in black oats, and a second in-crop spray is to control broadleaf winter weeds,” says Elton. “We use robust rates and ensure there are no survivors. A targeted winter fallow program would also go a long way to reducing the impact of herbicide resistance in black oats.”

Chickpea crops are now sown on the same 375 mm (15 inch) row spacing as the cereals, which is proving beneficial in both higher yield and weed suppression compared to the 760 mm (30 inch) spacing used previously in chickpea. Pre-emergent herbicide is applied ahead of chickpeas and in summer crops.

“We set our planting date to avoid frost risk and want to get the crop in as quickly as possible and have the option to use moisture seeking techniques in dry years,” says Elton. “You can’t overestimate the effect of canopy closure on weeds and evaporation.”