Ag Tech News - Is the future of farming hands-free? 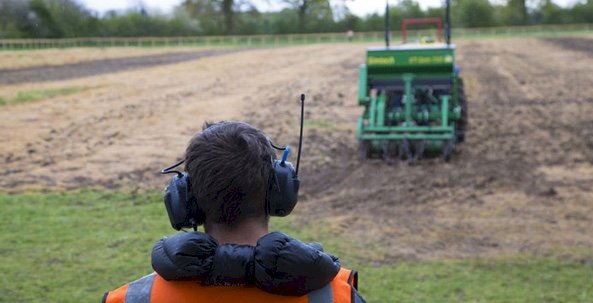 Listen to the Podcast here.

For some, the concept of hands-free farming is terrifying; for others, the prospect is game-changing and exciting. But, is fully autonomous farming really possible?

In this episode, we chat with Kit Franklin, senior lecturer in agricultural engineering at Harper Adams University in the UK, who in 2016 set out to prove an entire crop cycle could be done autonomously.

‘Everyone was saying it can't be done because it would have been done already. And we said - well, it can be done, we just haven't done it yet.’

Their project was called Hands Free Hectare, which later expanded into Hands Free Farm after garnering worldwide attention for producing what is believed to be the first crop to be planted, cultivated, and harvested - completely autonomously.

While Kit started this farming experiment simply to prove robotic farming was possible, how transferable is his autonomous trial crop to the real world? And is it how we want to be farming in the future?

This episode shares the following insights:

Agtech is changing the perception of farming.

Kit has found that agtech is attracting unlikely entrants to the agriculture industry. ‘Undergrad students came to Harper Adams because they saw my project and thought it was interesting. People who wouldn't have come into the agricultural industry, now sit in my lectures because of my project. This encapsulates what I'm trying to achieve here in terms of getting those new, fresh brains into the industry’ Kit explains.

Autonomous farming is massively disruptive to existing business models, so big companies may be less likely to tackle it.

Kit has been observing the evolution of the autonomous agriculture landscape over the past decade and continues to see more startups than incumbents, given that autonomy tends to cannibalize the dealership-heavy business model of existing agricultural equipment companies.

‘In the past, the market has been to buy a new tractor because it's bigger and shinier than the one you owned previously. This is how big companies have mostly sold, and that is the market. My work is suggesting that maybe it doesn't need to always be bigger. Maybe it needs to be more precise, smaller, niche, capable. Not just bigger.’

There are multiple possible business models with the potential to bring autonomous farming to market.

It’s not yet clear what a future of autonomous farming will look like, but considerations include:

Kit and the Hands-Free Farm team have chosen the retrofit path so that the project looks more familiar to producers. ‘We made our farm look like a farm to tell a story. I wanted a machine that looked like a tractor because I wanted it to be relatable and digestible to farmers. I didn't want it to look like a spaceship had landed in our field to do some farming.’

Autonomous agriculture can play a role in creating better and more jobs.

Talk of autonomy often comes with a fear that robots will replace jobs. Though this may be true in some places, Kit actually sees strong potential for autonomy to fill labor gaps as well as create better jobs for the future ag workforce. ‘A hundred years ago, 5% of the population worked on farms. Now 1% does. So, I'm not trying to cope with the lack of labor in the future. I'm trying to cope with the lack of labor now… agricultural robotics for me is about better utilizing the people we have.’

For more insights from Kit, listen to the episode above or wherever you get your podcasts!

Additional Resources from the Episode