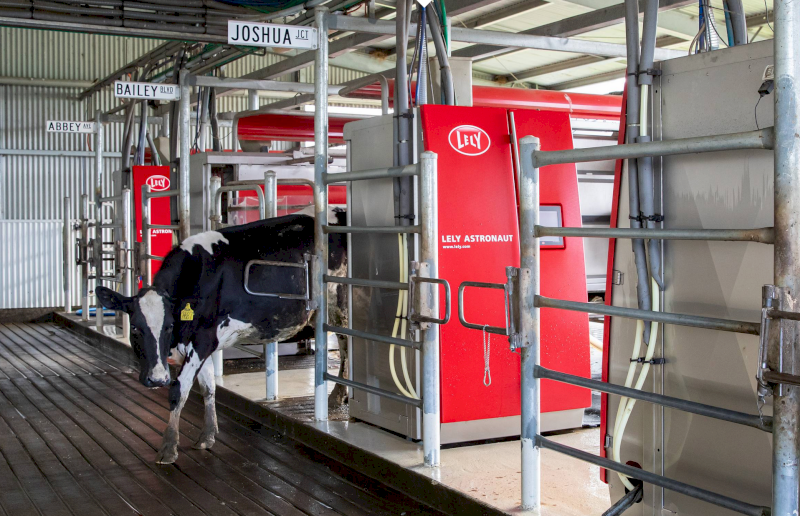 11 years ago this farming family started off with one cow called ‘Hope’. With no family farm to begin their farming journey, the couple made the move to South West Victoria as they were uncomfortable with water security where they were in Northern Victoria. Fast forward 11 years and they have over 700 animals and a milking platform they say is the perfect ‘Mum and Dad’ system.

On the home farm in Simpson, Victoria, Phil and Symone Vine milk 280 cows on 120 Ha. They purchased this farm 6 years ago with a run-down dairy that had to be replaced. They use Astronaut A4’s on this pasture-based farm. They had originally planned to build a conventional herringbone parlour, but some helpful advice from their bank manager and a drive to Gippsland to look into AMS got them thinking about an Automatic Milking System. Phil and Symone realised quickly they were considering an option they never really knew was within reach. “The look on Phil’s face just said it all…” says Symone, with Phil adding “these are the type of cows we want; calm, relaxed and in charge.”

Come 2016, construction was underway on their new greenfield site which would house 4 Lely Astronaut robots, plus 4 Lely Cosmix S concentrate feeders. With design, Phil had a focus on ensuring the shed optimised cow flow and natural cow behaviour.

In May 2016 the Lely team fired up the robots and in Phil’s words, “within 3 days of training the cows, we took away the training gates, it was a very low stress process”. Phil explained they didn’t really have any expectations, but were pleasantly surprised at the start-up.

“The cows are so relaxed in this system – they run the show. It enables good cows the chance to really shine”. The couple admit they could’ve done it smaller but I kept hearing “I’m only going to do this once” says Symone.

Phil was nicely surprised to see a 13% production increase in the first year after the introduction of their red robots, which are aptly named after their 4 children – Abbey (19), Bailey (15), Joshua (6) and Thomas (4). This increase in production has continued each year.

Utilising the Lely ABC grazing system, cows alternate between three grazing sections within a 24-hour period, meaning less pressure on pasture and more recovery time for paddocks between grazing. “The gut feeling is we harvest more grass with this system. Paddocks get a better break rate of around 50 to 80 days between rotations and we can cut 3 weeks ahead of the cows” says Phil. The couple have just started measuring paddocks so they can confirm this “gut feel”.

With 1.5 labour units, a general work day for Phil and Symone kicks off around 8am and consists of sweeping cows from a section, setting up new breaks, feeding out, cleaning, general farm duties and taking care of cows that need attention. “That’s the beauty of this system, it’s really flexible with no hard or fast rules. It’s great to be able to eat breakfast as a family, then start our day. When we’re off farm, we can still check-in on our phone to make sure everything is all good.

The phone app T4C In-Herd is great”, says Symone. Symone is so passionate about this system she left her part-time job to work on-farm. Saving himself around 6 hours a day in milking time, Phil is now able to better manage the 3 properties and spend his time where it’s needed most – and that’s not in the pit, cupping cows.

With big dreams to make sure they can hand over the dairy business, Phil and Symone aren’t working any less. Instead they’re offering a different dairy experience which is more flexible, and comfortable to work in, saying “to be fair we could run this place together with our eyes closed”. They hope AMS will be more attractive to the next generation. Looking after 3 properties and 4 children this busy couple aren’t working less hard – they’re just working smarter with the help of automation and loving it.

Phil and Symone Vine live together with children Abbey, Bailey, Joshua and Thomas in Simpson, Victoria. Here they run a dairy farm with 280 dairy cows . The average production is 23 litres per cow per day with 4.11% fat and 3.17% protein. The number of milkings per cow per day is 2.5.