Market to 51,436 farmer members and get higher indexing through the search engines.

I have for sale an Alfarm Belt type Airseeder cart. Model 550. It needs a new belt.
Originally designed as an in frame bin, I converted it to "Tow behind". The original wheels have been replaced with 14.00 by 24 header wheels, so it rolls easily. Also allows full vision of your seeder bar!
The original Deutz diesel driven fan has been replaced with a Smallaire Fan, hydraulically driven. Also a counter shaft has been added to the drive wheel mechanism, and a rear castor wheel [14.9 by 24 grader wheel ] also to make it work in the tow behind configuration.
Two bins of equal size capacity 1.5 T of wheat.- or about 1.75 T of MAP.
The grain side has a split gate system to allow canola to be accurately sown at under 2kg/ha. This is achieved by blocking off the main adjustable 'gate' on the belt feed, and using only a small 'gate' about 35 mm wide. When sowing wheat , barley, peas, beans, etc the full width of 200 mm is used..
Grain and Fertiliser feed to the airstream is by a venturi system, the bins are not sealed.
The main hoses are currently 2 inch, numbering eight of, but this could be easily adapt to any desired number of primary hoses,
The delivery hoses, and the mounting bracket to suit for your airseeder bar are included. Also an electronic fan speed readout for in the tractor cabin.
The unit, attached to the rear of the seeding bar, can be backed if necessary. Similar to backing a B-double or truck and dog. The rear castor wheel can rotate through 360 deg.
The 'project' would be to fit a new delivery belt - the one removed has done 20 years!
The photos show the drive wheel - hydraulically actuated, two general views, and the fan and fan drive hydraulic motor.
The belt mechanism is on the top of the bins, as is the hose assembly.[in the photos]
Six ten outlet primary heads are available if needed - not included in the base price for the Alfarm cart, but price negotiable. 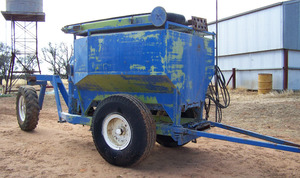